Nant G and me
by John Williams

I’d just finished my foundation level Welsh course through the Open University (2010) and I was thinking: Well, I’ve worked quite hard this year, and I’ve got a taste for the language but I haven’t been able to say much. Am I going to leave it like this after I’ve invested a year….? I’ve lived in Oxford for many years, and there aren’t many opportunities for me to practice my Welsh here – that’s why I chose the Open University course.

I’d wanted to learn Welsh since I was a child. My grandfather was the second son of a farmer from Dyffryn Ceiriong. There wasn’t enough work for him on the farm, so he moved to London where my father was born. I never had the chance to get to know my grandfather – he died when I was a baby – and it might have been that feeling that something was lost that made me want to learn the language. Decades ago, I’d tried to learn Welsh in my twenties. I went to night classes in London, but I found it difficult and didn’t have the time to persist. This is how things were lefts, until about 40 years later I learnt about the Open University course and after completing the course, here I was, not sure what to do next. This is when I saw an advert on S4C about learning Welsh at this beautiful place – Nant Gwrtheyrn. I decided straight away to register for a Foundation Course.

A few months later I was on my way down to the Nant, astonished at the amazing view across the sea and down towards Nant G. I was quite nervous, but there was no need to be – when I arrived, I received such a warm welcome from the office staff, tutors and café staff. They did everything to help me learn and to feel at home. My fellow students were also great. The course gave me the confidence that I needed and inspired me to keep on learning. It was from one of the tutors that I first heard about the online courses SaySomethingInWelsh and these helped me to keep going whilst I was back home in Oxford.

Since then I’ve been back to the Nant for many courses. Do I have a favourite? It’s difficult to choose. I’ve enjoyed them all and felt that my Welsh has improved following each one. But if I have to choose, it has to be two of the Advanced level 2 course that give you an opportunity to practice speaking Welsh whilst learning about a specific subject to do with Welsh culture and way of life, these are taught by tutors that really know their stuff. My favourites have been a course looking at Welsh authors by Bethan Gwanas and a course about Welsh films taught by Mared Llywelyn Williams – these have been really interesting and such fun.

I’ve learnt so much at Nant G, had a lot of fun and made great friends – and quite unexpectedly, also enjoyed many sunny days! The courses have given me the confidence and courage to do other things through the medium of Welsh,  to speak Welsh in shops, cafés and hotels. I’ve been to the national Eisteddfod I’ve been on nature walks with the Edward Llwyd Society), I did a creative writing course for learners at Tŷ Newydd and I’ve visited Patagonia with some fellow Welsh friends. When I started, I was focused on learning the language, and this was my only intention. But by doing so I’ve opened the door to the richness of Welsh culture, and truly, this has enriched and filled my life with such pleasure, so diolch, Nant G. 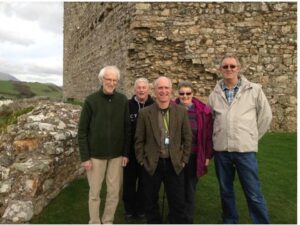